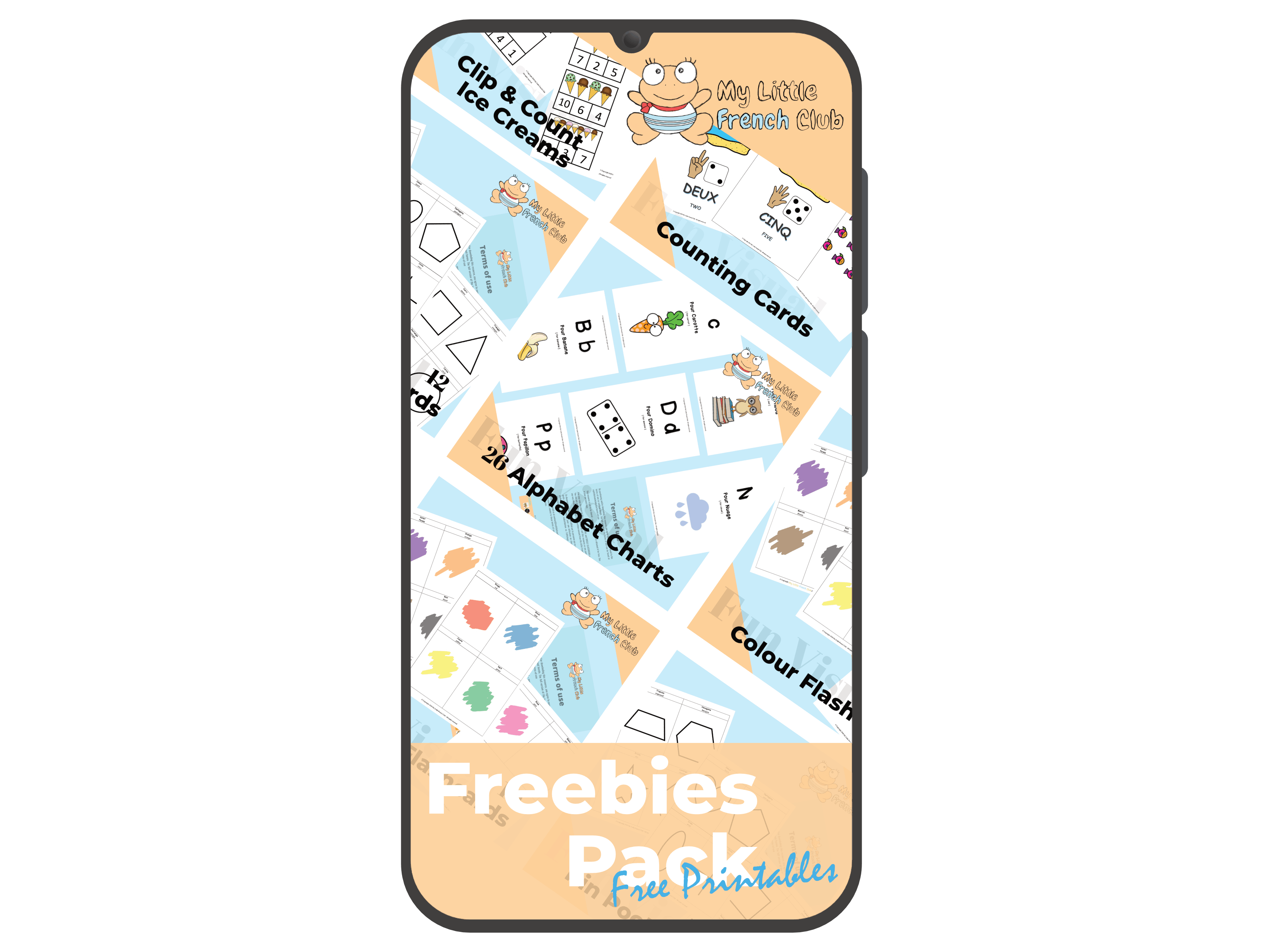 Don’t feel like shopping around? You can get my entire freebies collection here! 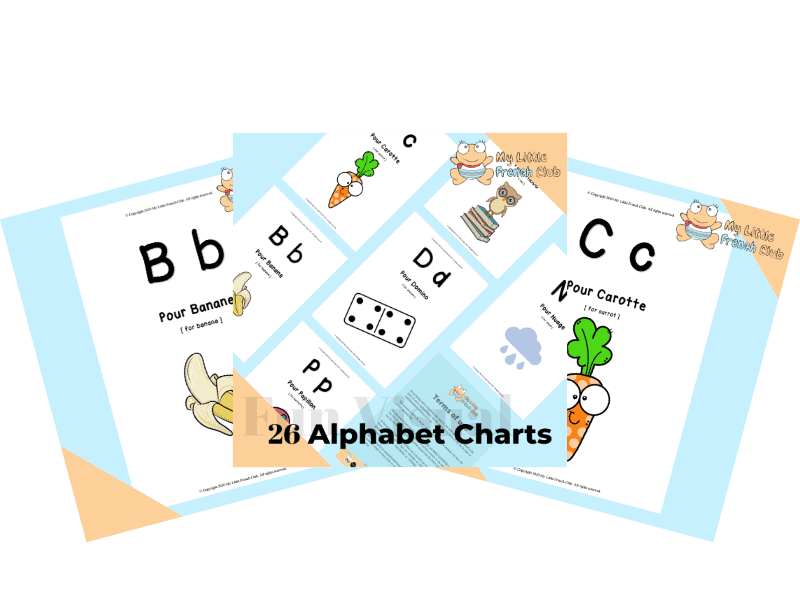 Featuring colourful graphics, your preschool children will love learning the letters of the alphabet featuring French vocabulary with these beautiful alphabet charts. 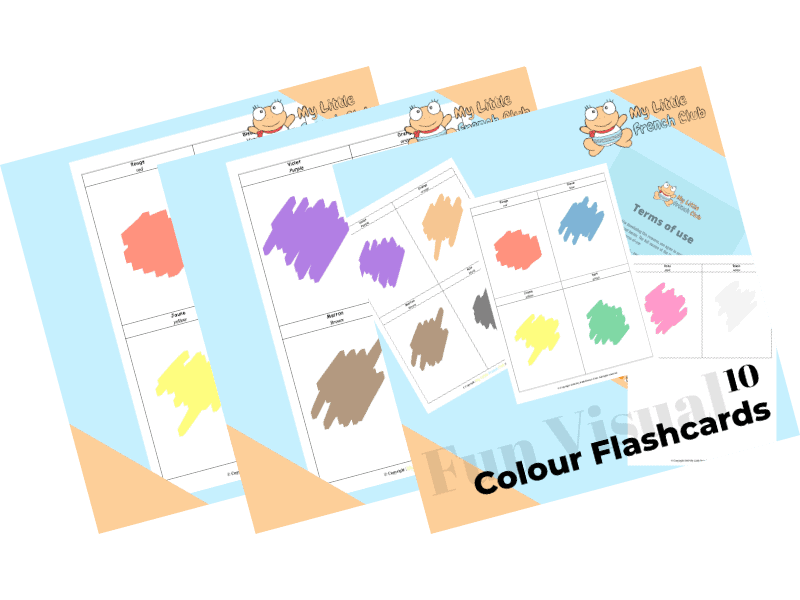 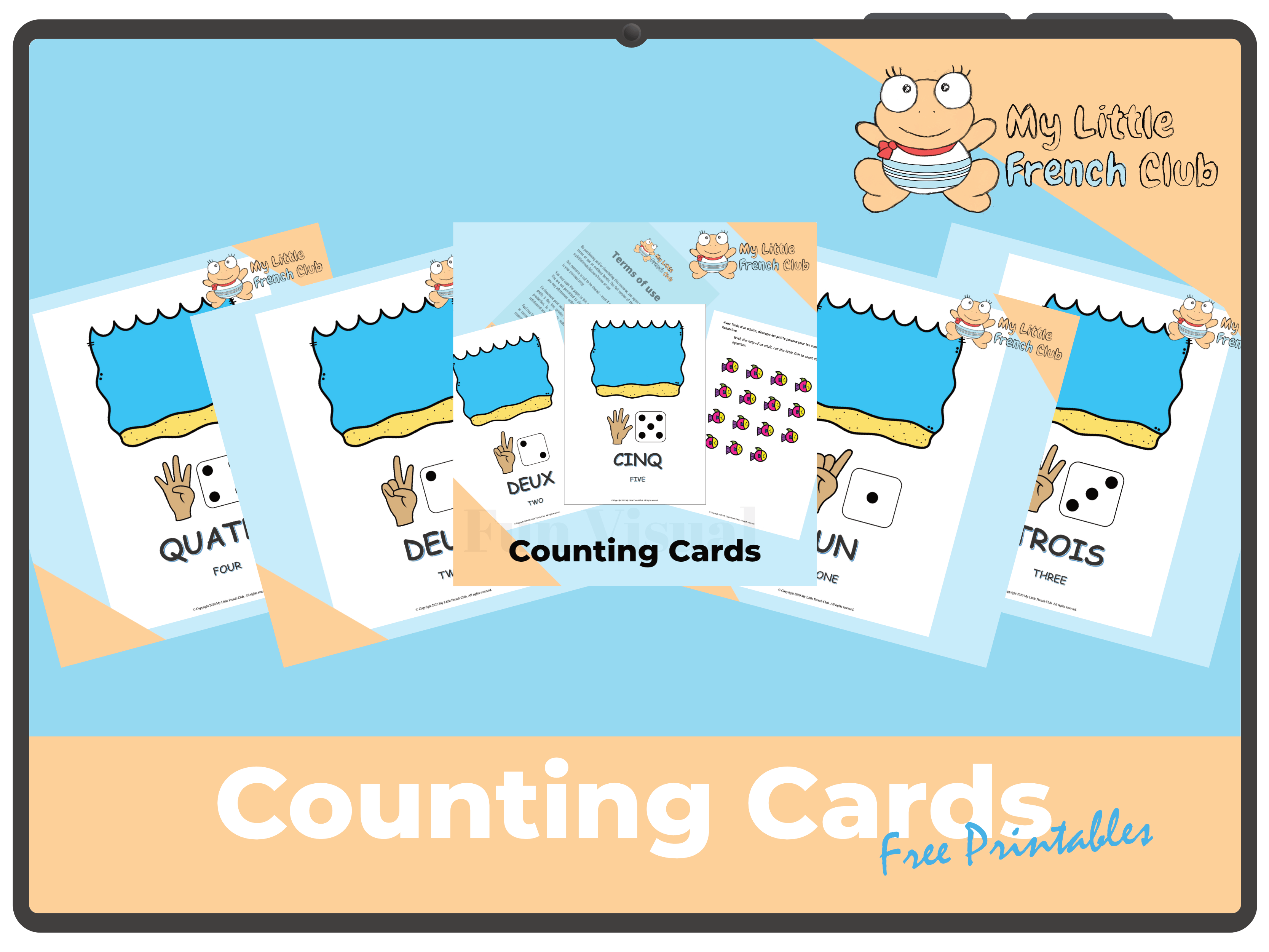 Who doesn’t love fishing? These Counting cards are great to help your young kids develop their numeracy skills in French. It is fun to use and easy to set up! Sound and letter recognition are important steps – and often the very first steps – leading to reading. Children often find it extraordinarily fascinating to be able to recognise and read-out-loud their own names; which undoubtedly makes it meaningful and fun!

My son started pre-school last Summer (January 2020) and was asked to recognise and say-out-loud the letters of his name. I looked for playful ways to encourage him, then 3-years old, in his learning curve.

When introducing print awareness to your child, remember that they first need to understand that their name is a word.

From a young age, try emphasising on certain words when speaking with your child so they can grasp the concept of sentences being made up of different words.

When I introduced name recognition activities, I personally started by introducing the sound of the first letter in his name, so he could have a point of reference to start off with.

Try doing this in French to grasp the sounds in French.

And then my son would be hunting around the house or outside to find other objects/things starting with the sound /s/ /s/ /s/ such as “serpent”, “sapin”, “seau”, “sac”, “sable”, “sauterelle”, “souris”, etc.

Below are 6 Name Recognition or Name Making activities to help your child recognise and read their name in a fun way!

What is better than singing a well-known song (that is, one which is well-known to your child) but substitute a part of it with your child’s name.

For example, for 2-syllable names, “Bouba, le petit ourson” (a.k.a. Jacky and Jill) is a well-known kids’ song by Chantal Goya. The lyrics are very catchy and easy to remember. You can easily substitute “Bouba” with your child’s name:

You can pick any songs provided it’s easy to remember and provided your child’s name, and letters can be said out-loud distinctively and easily.

A 3-year old is still developing its pencil grip and might not be able to write his/her name straight away which could turn out to be very frustrating for your child.

At the beginning of the name recognition journey, I used to grab a small dry-erase whiteboard, I would tell my son I was going to write his name, and that his name is a word. I would then write his name saying each letter as I wrote it out. I would then ask him, using his index finger, to erase the letter I was pronouncing the sound for.

This activity is a great fine motor activity which helps with hand-eye coordination, as children need to concentrate deeply to erase just that one letter with their index finger.

Draw or print your child’s name on a paper (you can laminate it to re-use it over and over again).

Using any small objects you can find around the house such as small pebbles, pom poms, shells, buttons, cotton balls, etc, ask your child to outline the letters of their name to “cover them up”. This is another great fine motor activity, as your child need to concentrate to pick up the small objects and place them on the letters.

Another way to “cover-up” letter could be by using small cars and drive them over large-printed letters or road stickers displayed in the shape of letters.

You can ask your child to drive over the letter while pronouncing the sound.

Write each letter of your child’s name on an A4 piece of paper and decorate the letter with things relevant to objects commencing with the same sound.

For example, for the letter S, you can make a snake out of the S (for “serpent”), stick little mice stickers on it (for “souris”), draw a beach and add a bucket sticker (for “seau”) in the sand (for “sable”), etc.

Each time you use a different object, emphasize on the sound it makes and re-iterate it is the same as the sound of the letter of your child’s name.

You can do this craft activity over multiple weeks – by doing 1 letter per week for example and add to the letter each day. Make a letter book with all your letters once finished.

Once your child is confident recognising the letters of their own name, you can start adding other letters to your letter book. 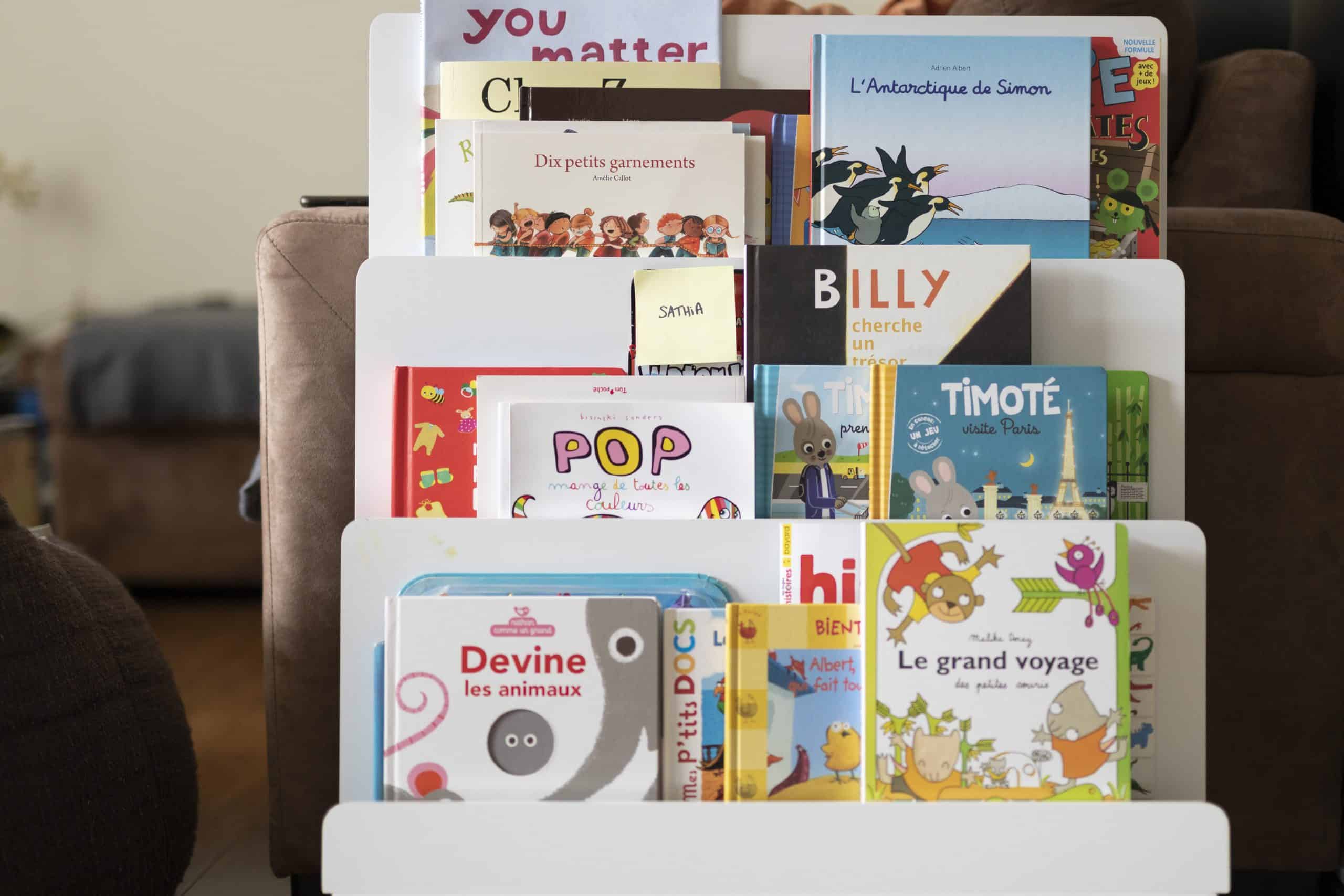 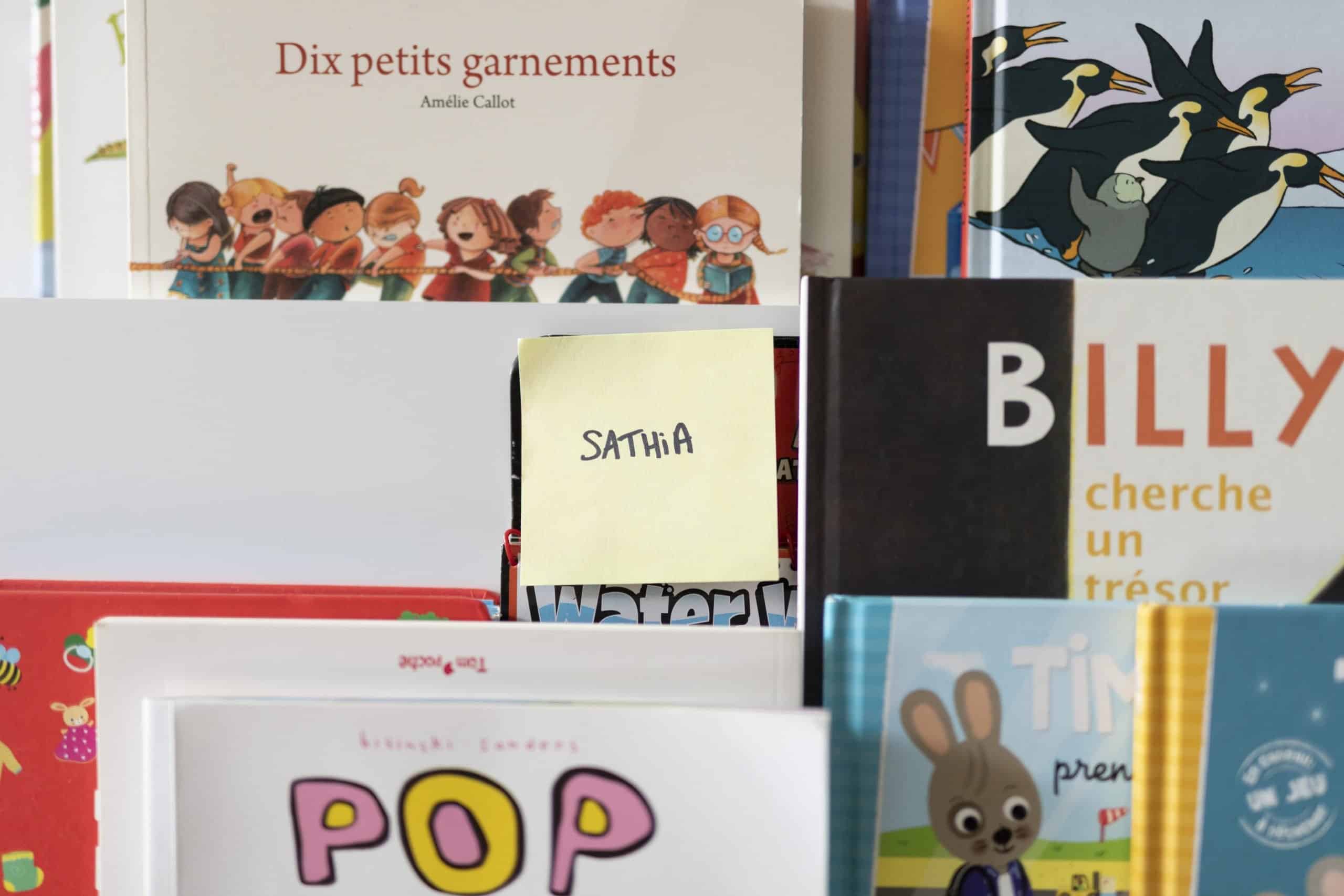 There are different ways to organise a name or letter hunt:

Watch as your child’s excitement each time they find a piece of paper with their name or a letter written on it.

What is better than playdough to help your child build fine motor skills?!

I mean think of these rolling, manipulating and shaping skills which help with the development of those little fingers.

And even better if you can combine these skills to make your child’s name with play dough! Play dough certainly makes name recognition learning relevant and fun!

By making the letter of their names themselves, they also start building their print awareness as they can touch and feel the letters.

Hope you find some of these ideas useful. Do you have any other playful ways you use to help your child recognise their name? I’d love to hear from you below. Until then, have fun helping your little learners recognise and read their own name.

GET NOTIFIED WHEN I RELEASE MY NEW FREEBIES How to build an easy DIY Light Table

Light tables are great for young kids and preschoolers as they invite them to explore play through light, shadow, colour and transparency. The light...
Read More 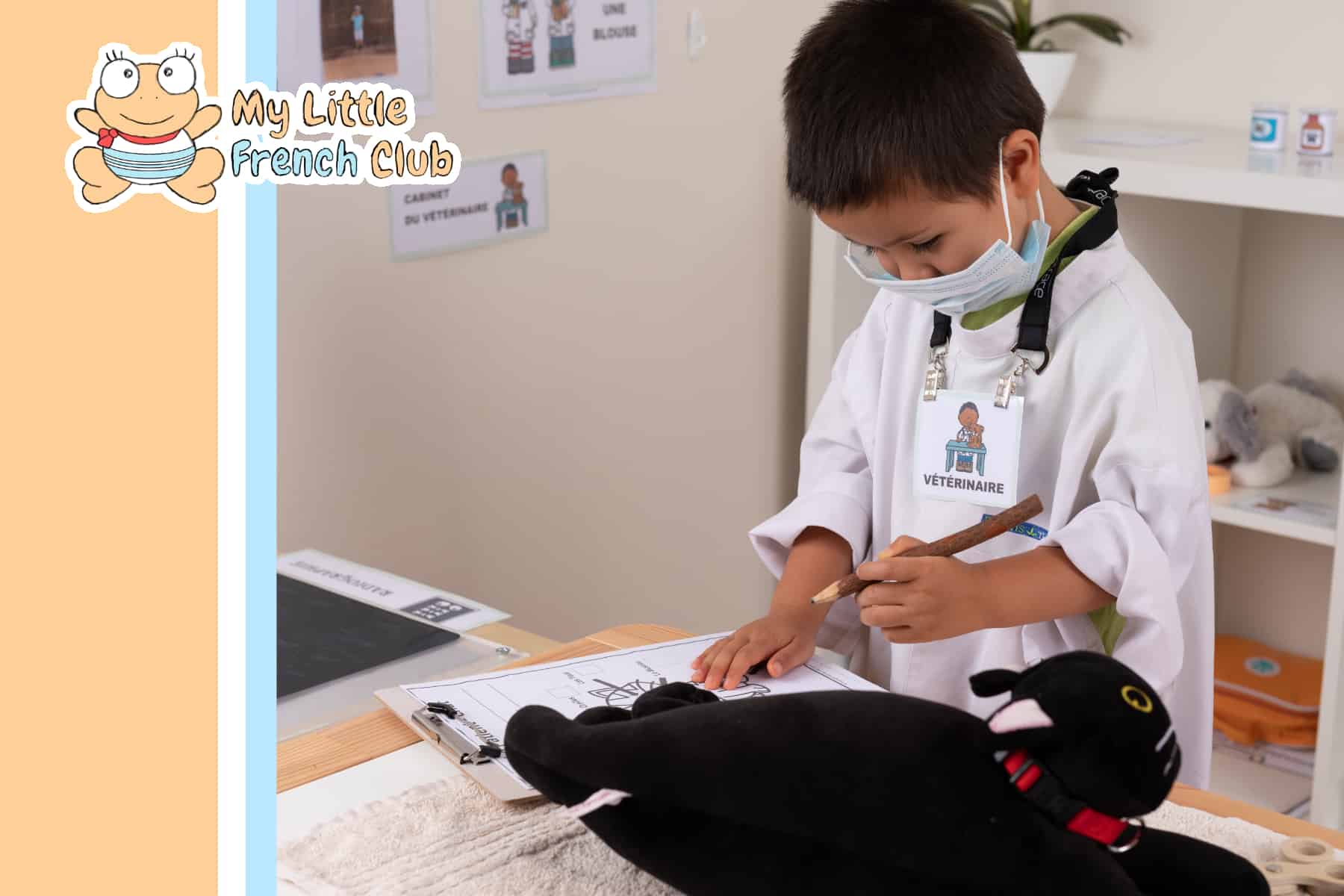 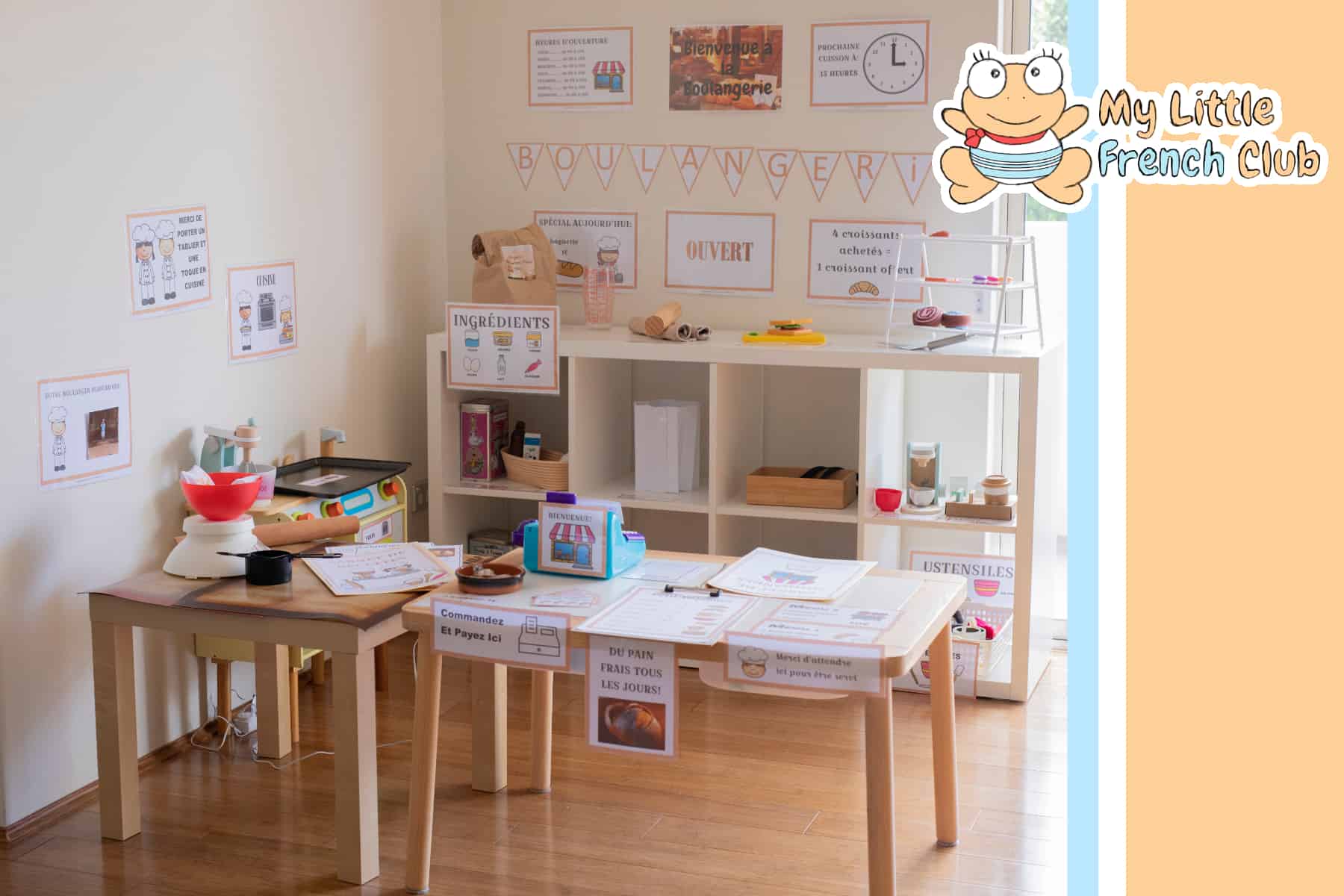 Dramatic role play or “jeu de rôle” is a great way to encourage your kids speaking in French in a dedicated play space by using themed content...
Read More 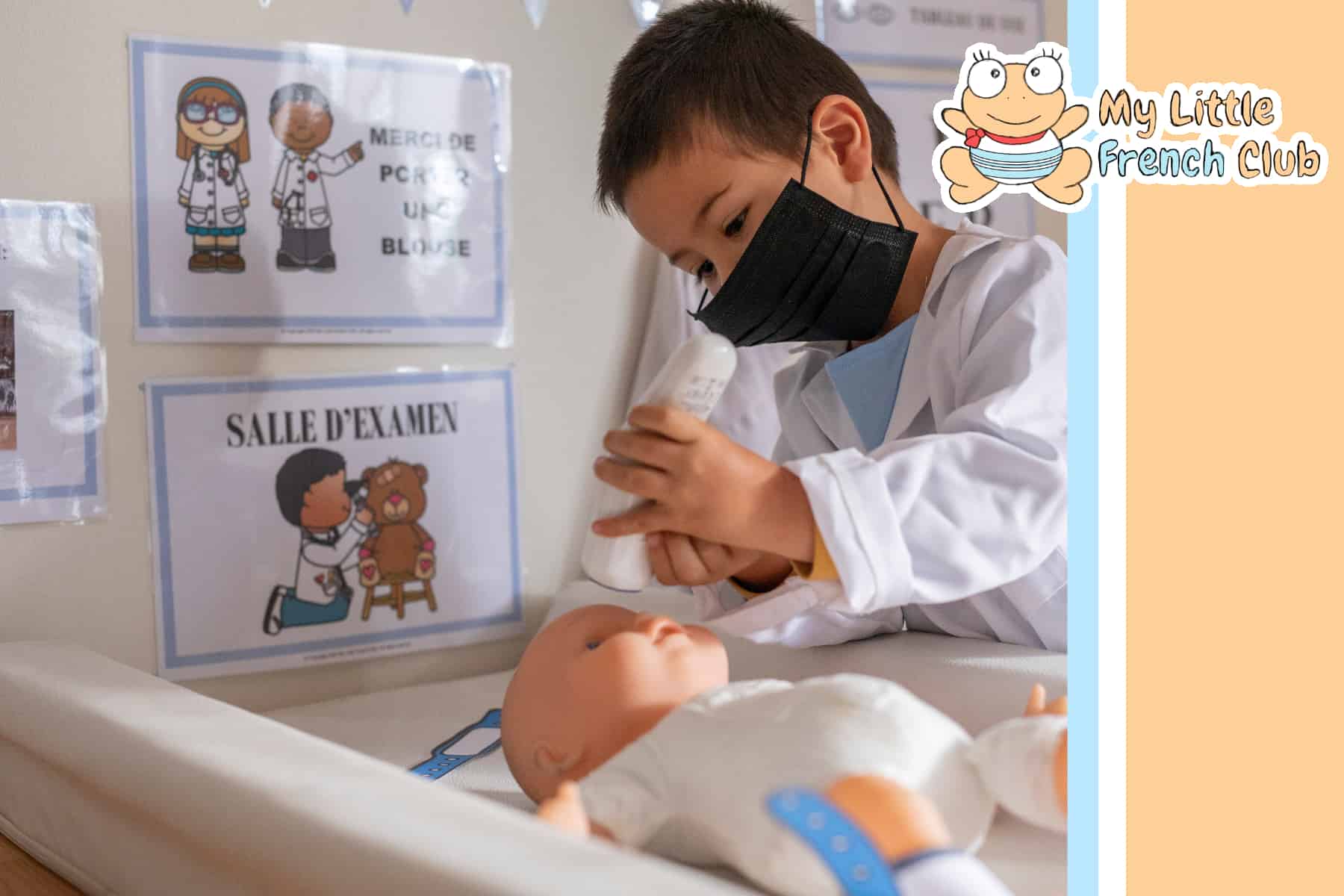 5 Reasons You Should Read French books to your Kids

Our household is filled with French storybooks. We just adore them and can keep reading for hours on any days. Being a French family living in...
Read More Kids love to explore through sensory activities. However, some materials can be very toxic. To avoid any risk for our little people if they taste...
Read More 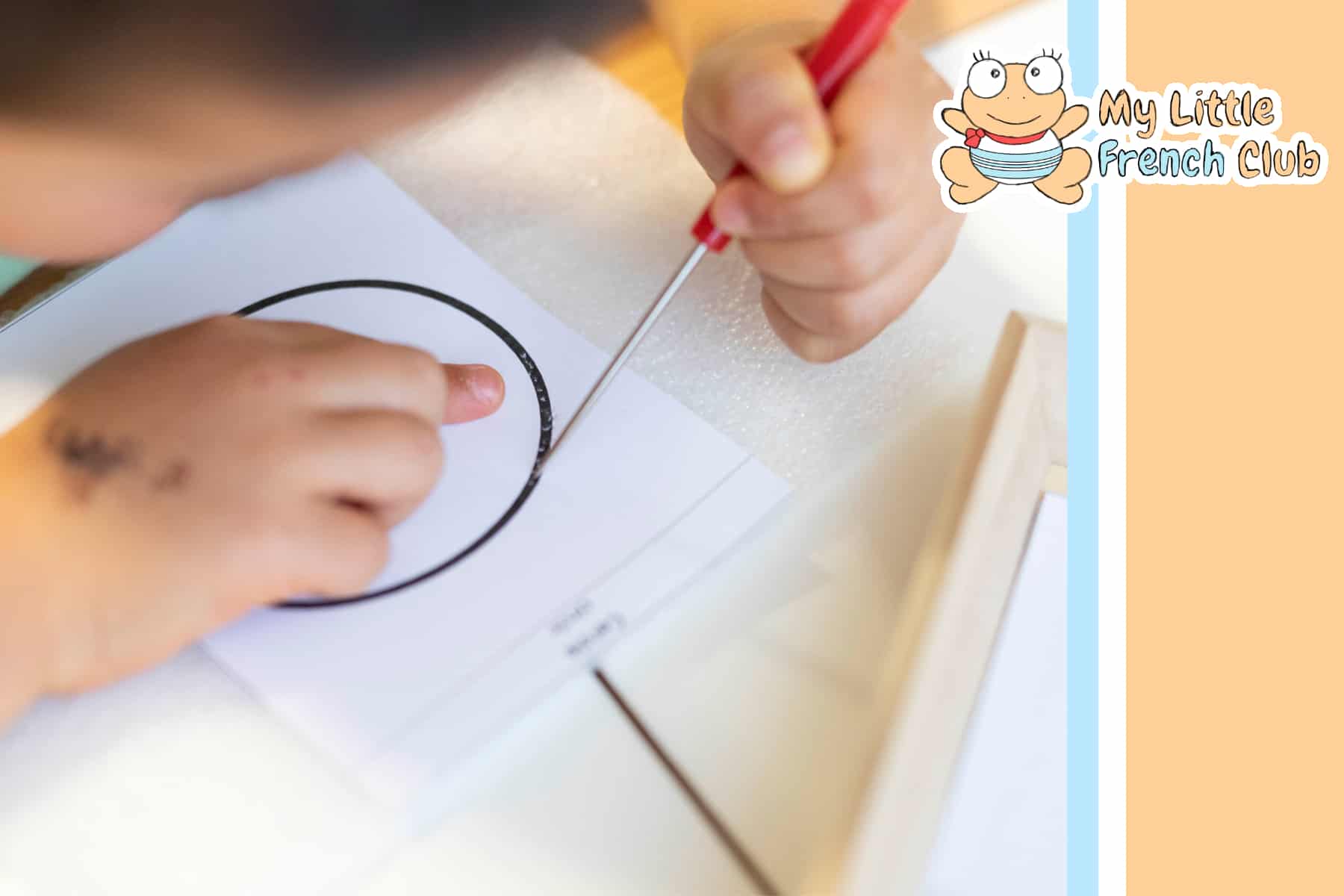 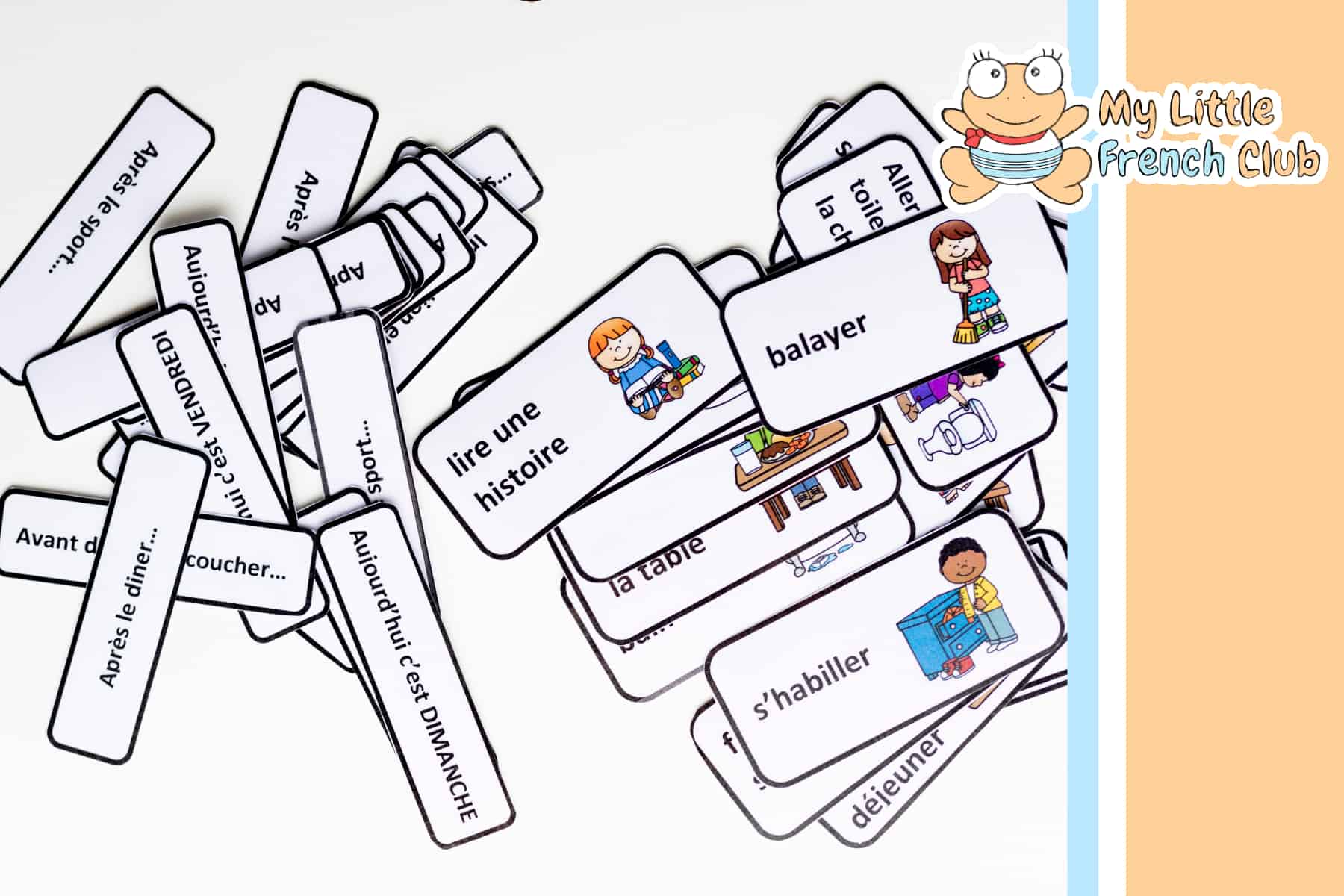 KEY BENEFITS OF HAVING A DAILY ROUTINE + FREE PRINTABLES

I remember towards the end of my pregnancy, my then-neighbour used to tell me: “routine, routine, routine… this is the key to happy babies and...
Read More How to incorporate art for kids?

I absolutely love seeing my son being creative when I give him a piece of paper and some paints. My philosophy is quite simple: free of rules - the...
Read More
Check My Blog

See what's in my shop

GET NOTIFIED WHEN I RELEASE NEW FREEBIES 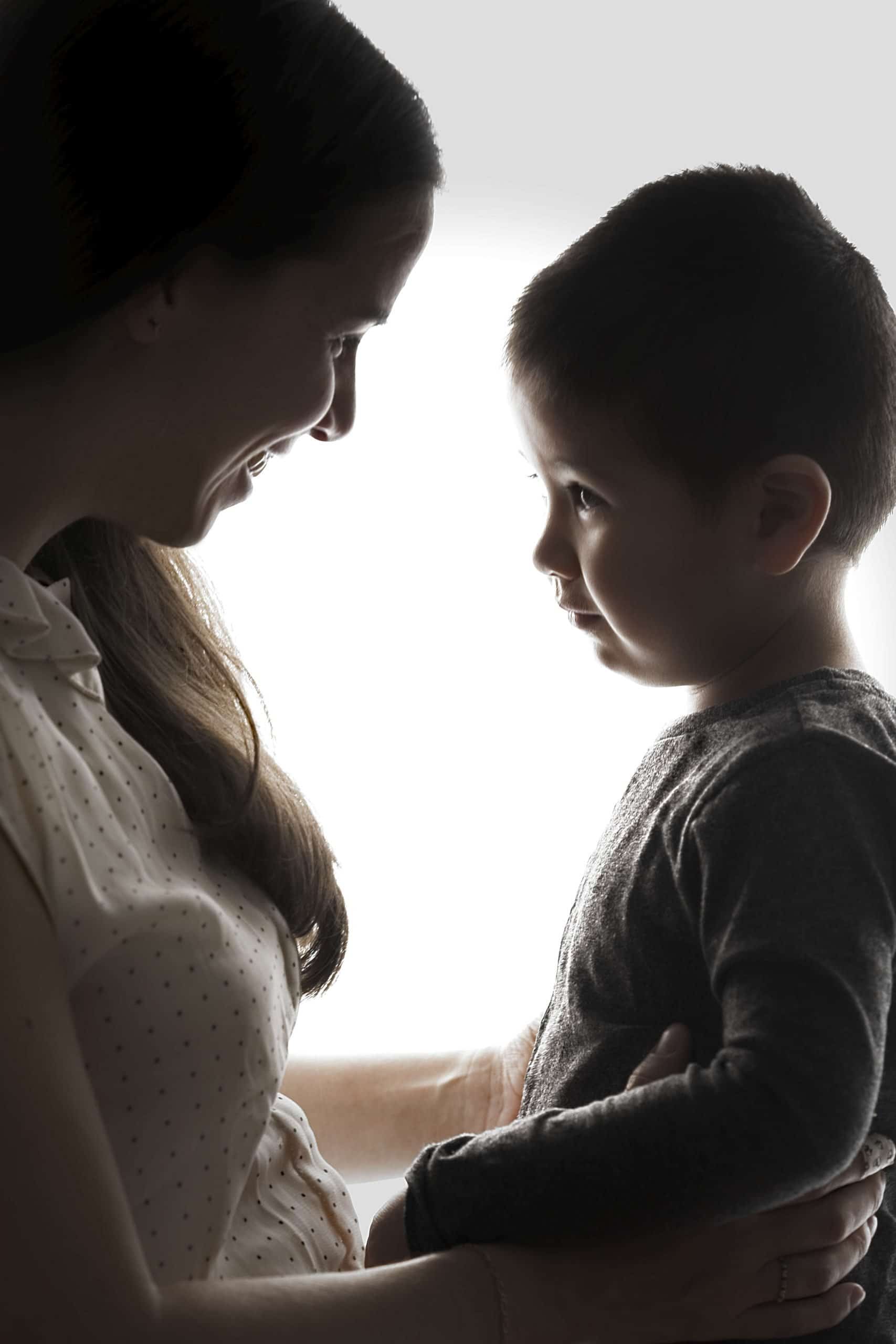 Founder of the Little French Club and homeschooling parent of my son, I love being creative to make learning fun and engaging in French while living in Australia. Originally from France, I blog about easy and playful activities with the aim to engage in French and share the French culture with our little people.

You May Also Be 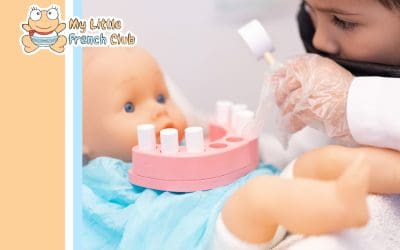 Dramatic role-play or “jeu de rôle” is a great way to encourage your kids speaking in French in a dedicated play space by using themed content... 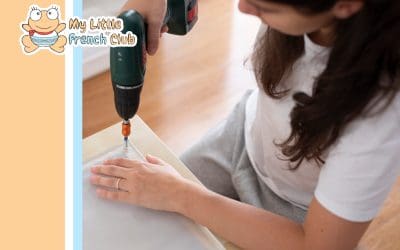 How to build an easy DIY Light Table

Light tables are great for young kids and preschoolers as they invite them to explore play through light, shadow, colour and transparency. The light... 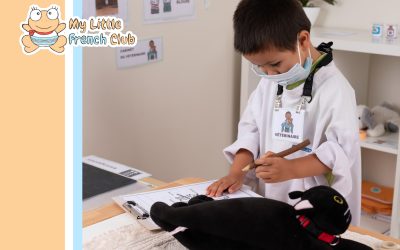 Dramatic role-play or “jeu de rôle” is a great way to encourage your kids speaking in French in a dedicated play space by using themed content...

« Older Entries
Back To All Articles